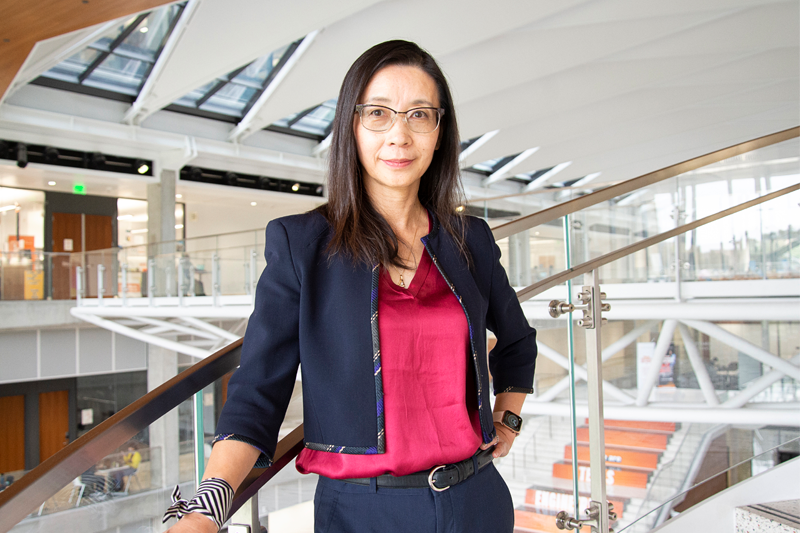 Xiuling Li is a professor and holds the Temple Foundation Endowed Professorship No. 3 in the Department of Electrical and Computer Engineering at The University of Texas at Austin.

Dr. Li received her B.S. degree form Peking University and Ph.D. degree from the University of California at Los Angeles. Following post-doctoral positions at California Institute of Technology and University of Illinois, as well as industry experience at II-VI, Inc. (formerly EpiWorks, Inc.), she joined the faculty of the University of Illinois, Urbana-Champaign (UIUC) in 2007. At UIUC, she was the Donald Biggar Willett Professor in Engineering and the interim director of the Nick Holonyak Jr. Micro and Nanotechnology Laboratory. She joined the faculty of UT in Aug. 2021. She holds the Temple Foundation Endowed Professorship No. 3 Professor in Department of Electrical and Computer Engineering. She also has an affiliate appointment in Chemistry as the Fellow of the Dow Professorship.

Her research focuses on nanostructured semiconductor materials and devices. She has published >160 journal papers and holds >20+ patents, delivered > 140 invited lectures worldwide. Her research opens new avenues by using innovative epitaxial growth and nanofabrication approaches including metalorganic chemical vapor deposition (MOCVD) of III-N and Ga2O3, metal-assisted chemical vapor deposition (MacEtch), and strain-induced self-rolled-up membranes (S-RuM), to address the ever-present needs to reduce the size, weight, power, and cost (SWAP-C) of microelectronic devices, among other applications. She has been honored with the NSF CAREER award, DARPA Young Faculty Award, and ONR Young Investigator Award. She is a Fellow of the IEEE, the American Physics Society (APS), the Optical Society (OSA), and the National Academy of Inventors (NAI), and the American Association for the Advancement of Science (AAAS).

Among her synergistic activities, she served as an elected member of the board of governors and VP of Finance and Administration of IEEE Photonics Society and is currently on the fellow evaluation committee of IEEE Electron Device Society, and IEEE Andrew Grove award committee. She is also a Deputy Editor of Applied Physics Letters.