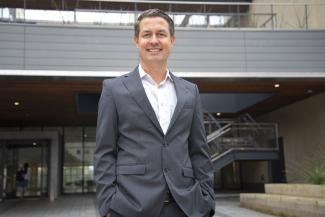 Prof. Jeff Andrews of Texas ECE has been named as a recipient of a 2021 Qualcomm Faculty Award. The Qualcomm Faculty Award (QFA) "supports key professors and their research through a $75,000 charitable donation to their university. The goal of the QFA funding is to strengthen Qualcomm’s engagement with faculty who are playing a key role in our recruiting of top graduate students."

Dr. Jeffrey Andrews is a professor and holds the Cockrell Family Chair in Engineering #17 in the Department of Electrical and Computer Engineering at The University of Texas at Austin. Dr. Andrews is an ISI Highly Cited Researcher and has been co-recipient of 15 paper awards including the 2016 IEEE Communications Society & Information Theory Society Joint Paper Award, the 2014 IEEE Stephen O. Rice Prize, the 2014 and 2018 IEEE Leonard G. Abraham Prize, the 2011 and 2016 IEEE Heinrich Hertz Prize, and the 2010 IEEE ComSoc Best Tutorial Paper Award. He received the 2015 Terman Award, the NSF CAREER Award, is an IEEE Fellow, and received the 2019 IEEE Kiyo Tomiyasu technical field award.