Connecting the Dots – Insights in Innovation, Technology, and Career Management

Over the last three decades, industry giants have built vast fortunes by riding key waves of evolutionary change in electronics markets – such as Intel and AMD in processors for PCs and Data Centers; and Qualcomm and Mediatek in mobile communications/connectivity for Smartphones. We believe the next wave in semiconductors will be driven by a wholesale migration of embedded computing from un-connected “offline” devices to an intelligent, inter-connected “online” network. With more than 20 billion embedded devices shipped each year, all of which need to be eventually connected, the technology sector is at a momentous inflection with connectivity as the critical fulcrum. Given the ever-expanding range of embedded applications and often widely differing requirements, retrofitting PC/Smartphone architectures will not suffice. Daniel will also pass along key insights into overall career management that he has picked up living in multiple continents and working in both technology, business, and corporate job functions. 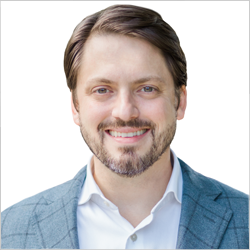 Daniel Cooley serves as Chief Technology Officer of Silicon Labs, where he is responsible for the company’s overall research and development strategy and execution. Cooley is a respected IoT industry visionary and has been instrumental in building the unmatched breadth and depth of the company’s wireless connectivity portfolio. Previously, Daniel served as Senior Vice President and Chief Strategy Officer, where he led Silicon Labs’ overall strategy, corporate development, M&A, emerging markets, and security. Prior to that, Daniel led Silicon Labs’ IoT business as Senior Vice President and General Manager. Since 2005, Cooley has served in a variety of engineering and business leadership positions at Silicon Labs in the US, Asia and Europe.

He has an M.S. in Electrical Engineering from Stanford University and a B.S. in Electrical Engineering from The University of Texas at Austin and holds four patents in radio and low-power technology. Daniel currently serves on the board of directors for the OpenHW Group, Thinkery, Texas4000, and the Austin Symphony Orchestra. He also advises startups in the Austin area.